READY TO PLAN YOUR SHORE EXCURSIONS?

Cape Liberty Cruise Port, New Jersey is located on the New York Bay, just seven miles from New York City and three miles from Newark, New Jersey. Its waterfront location and convenience to the Big Apple allows visitors easy access to everything it has to offer, including some of the world's best restaurants, amazing shows, historic monuments, countless museums and more!

Halifax is Atlantic Canada’s center of business, research and education. Strong emphasis is placed on cultural diversity, historic restorations and the preservation of heritage and culture. The Halifax Citadel Fortress dominates downtown Halifax. Take a stroll along the waterfront past restored buildings and warehouses of Historic Properties, or a walk in delightful Public Gardens, the oldest Victorian gardens in North America. Halifax’s sister city of Dartmouth lies on the opposite shore and is reached via the oldest saltwater ferry in North America. The spectacular view of Halifax harbor makes the trip worthwhile. Housed in former Dominion Building, the Art Gallery of Nova Scotia features Nova Scotia folk art and maritime artists. A two-hour walk will easily show you the major highlights of historic and scenic Halifax. Visit Historic Properties, St. Paul’s Church and Province House, the latter two being the oldest buildings in the city. Granite Springs is rated one of the finest 18-hole golf courses in Atlantic Canada.

St. John's, a classic harbor city, is capital of Newfoundland. Old accents and customs are common, yet Saint John is still modern. The city recently celebrated its 500th anniversary as a modern city with preserved heritage and culture. It offers old world charm, unique architectural and historic landmarks, fine cuisine and many other attractions. Historic downtown features unique sites, such as Cabot Tower on Signal Hill overlooking the harbor and the city. The famous friendliness, hospitality and charm of the people of Saint John, plus the Newfoundland folk music found in many of the lively waterfront bars, ensure a perfect visit. A 3 mile Rennies River Trail cuts through the city along a wooded stream and ends at the only public fluvarium in North America, where in late October/early November one can observe spawning brown and brook trout in their natural habitat through underwater windows. The Bowring Victorian park was donated by the wealthy Bowring family in 1911, and resembles the parks of London after which is was modeled.

Qaqortoq means "The White Place", and the town is the educational and cultural center of Southern Greenland. The sheep farms give this part of Greenland special character. Qaqortoq has a sculpture park "Stone and Man" made by 18 Nordic sculptors. The result is 24 sculptures and reliefs spread all over town. Greenland's only public fountain is in the town square. The square is the historical part of town, with many buildings from colonial times and a museum concentrating on Greenlandic culture, the Norse period and the history of Qaqortoq. Close to the square is "Brædtet" market where local fishermen and hunters sell the days catch. There are 2 churches in town; "Frelserens" from 1832 and "Gertrud Raschs" from 1973. "Frelserens" hans the lifebuoy and memorial tablet with the names of those missing from M/S Hans Hedtoft, which went down in January 1959. "Gertrud Raschs" has one of Greenlands most beautiful altar pieces made by artist Maria Haagen-Müller.

This narrow 70-mile-long channel across the southernmost tip of Greenland is breathtakingly dramatic. Huge glaciers tumble down towards the rugged coast from the Greenland ice cap-exactly the kind of scene that inspired one Greenlandic poet to declare: 'I get dizzy of all this beauty'. A thousand years ago, just north of here at Narsarsuaq, Eric the Red established his farm amid 6,000-foot mountains and glaciers.

Akureyri is one of Iceland's oldest towns, and features picturesque historic houses set below snowcapped peaks, botanical gardens and several museums. Explore the interior to see Godafoss Waterfall and Lake Myvatn. It is the largest settlement outside the south-west of Iceland, and one of the country's largest cities. The name means "Meadow Sandspit" in Icelandic. Akureyri is an important shipyard and fishing port, as well as a commercial and distributing centre for agriculture and manufacturing.

The town of Isafjord is a bona fide hive of industry. This busy fishing port runs to sizable shipyards as well as shrimp and fish factories— all ready to handle the catch of the day from the icy waters of the Denmark Strait. Recreational activities around here include hiking, kayaking, and of course, fishing.

The fire, frost and water symbolized by the red, white and blue of Iceland’s flag are manifested in this land. Reykjavik, or Smoky Bay, was so named in 874 A.D. by Ingolf Arnarson when he sighted the numerous hot springs on the Seltjarnarnes Peninsula. Today this remarkably pollution-free city is wrapped around a sweeping bay and has managed to retain its charming Old-World atmosphere. A pastiche of red-blue-and green-roofed houses together with the tall gray tower of Hallgrim’s Church dominate the skyline. In Old Town, many of the wooden buildings have been lovingly restored and stand side by side with modern timber and concrete structures. There are fine museums and art galleries; historic pubs present activity in late afternoon. The beautiful countryside outside of Reykjavik includes such natural wonders as volcanoes, geysers, glaciers, mountains and spectacular waterfalls.

Super-jeep safari to the glacier cave and snowmobiling 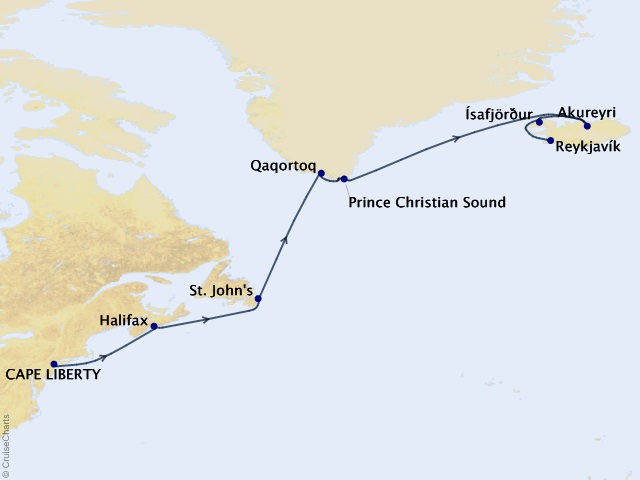 Itinerary subject to change without notice. Please confirm itinerary at time of booking.

Rates are cruise only, per person, based on double occupancy. Taxes, Fees and Port Expenses of $242.34 additional for all guests. Rates are subject to availability and may change without notice. Restrictions may apply.

Departure Date:
8/7/2022
Number of Nights
12
Cruise Inclusions:
Available Addons:
Optional roundtrip airfare from your city
Optional shore excursions
Remarks:
Prices are per person, based on double occupancy. Airfare, Taxes, Fees and Port Expenses are additional for all guests. Pricing for 3rd and 4th guests are available upon request and are subject to stateroom category availability. Prices change frequently

All prices per person and in USD unless otherwise stated.
Offer ID:
1406042

Reference this number when contacting our agency so we may better serve you. Also keeping this number handy will allow you to locate this document again quickly.

Information and pricing is subject to change without notice. While we do our very best to ensure that information and pricing appearing in this website is complete and accurate, we cannot be responsible for incomplete and inaccurate representations, which may or may not be under our control. In the event of a pricing error, misrepresentation or omission, we reserve the right to adjust the pricing or make any other corrections.